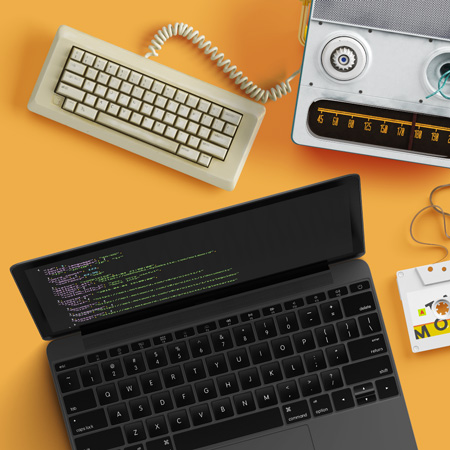 Translating The Language of Machines

Share
Ever since their beginning, humans have evolved to use their hands to make tools and communicate with each other. These human-made tools have evolved to a point where we constantly use the greatest communication tool created to date: the computer. But how did that happen? How does our interaction with machines affect our life?

How can we transition from the very philosophical idea of human evolution to computational user experience and programming?

From my professional, technical perspective, I am amazed by the human mind’s ability to govern its environment. I decided to become an engineer to research that very topic. My job today at MotaWord is to translate routine problems into the language of the machines: into computer code.
The first computer ever was created for translation. This journey begins in England. Alan Turing was trying to crack encrypted Nazi military messages during World War II. With his mathematical genius and curiosity for machines, he realized that any system can be implemented by machines; as easy as a wristwatch showing time.
Computers are able to perform actions when you can “explain” it in their language: in code. But what exactly is computer code when it performs as a language? At heart, it is mathematics. Although coding engineers do not work with pure math or binary code, the language of the machines is far from human language. The language of the machines is derived from mathematical expressions.
Like natural, human languages, the programming language has grammatical rules. As you can guess when we talk about computers, there are many strict rules when it comes to explaining something to the computer to get it to perform the action we want. Do not worry, I am not going to bore you with language processing jargon. I just want to point out that we have to follow these programming rules of grammar with absolute certainty, so various services, like applications, can be enjoyed on your devices.
Another exciting element of machine language is communicating with an entity that is entirely digital. Have you ever thought that in the near future, we may be able to talk to a computer without knowing it is a machine? You may have heard about Artificial Intelligence and robots like Sophia from the news. Sophia can speak very fluently and give answers. What is the mechanism behind this phenomenon? A  very complicated network of processors inside Sophia is trying to dissect the words and applying rules constantly. This is how robots can understand us.
In conclusion, we understand how professional translation is a cornerstone to keep ourselves connected to the world. At Motaword, we work every day to deliver you the fastest, most accurate translation experience with this philosophy, and we are using and researching the latest technology. We combine the latest advancements with topnotch human quality control methods.
And in doing so, we are bringing machines and humans closer.
About MotaWord
MotaWord is the world’s fastest professional translation platform. Through the use of cloud technologies, smart algorithms that manage projects around the clock and over 15 thousand professional translators MotaWord provides high-quality translations in any language 60% cheaper and 20 times faster than traditional translation agencies.