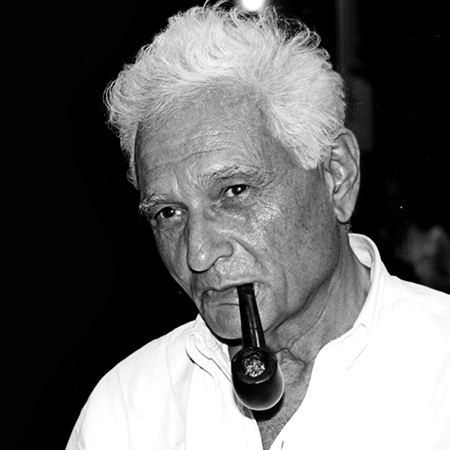 “How dare one speak of translation before you who, in your vigilant awareness of the immense stakes-- and not only of the fate of literature-- make this sublime and impossible task your desire, your anxiety, your travail, your knowledge, and your knowing skill?

How dare I proceed before you, knowing myself to be at once rude and inexperienced in this domain, as someone who, from the very first moment, from his very first attempts (which I could recount to you, as the English saying goes, off the record), shunned the translators métier, his beautiful and terrifying responsibility, his insolvent duty and debt, without ceasing to tell himself “never ever again”: no, precisely, I would never dare, I should never, could never, would never manage to pull it off.”

- Jacques Derrida, “What Is a ‘Relevant’ Translation?”, translated from French by Lawrence Venuti

Why begin our ‘Famous Translations’ segment with a literary philosopher who famously loathed the act of translating, himself? Although Jacques Derrida did not make a career as a French translator, his work centered around his faith in language as the most natural and best way to communicate. His criticism of ‘relevant’ translation can actually be read as a praise to professional translators -- those who are existentially strong enough to cope with the ‘beautiful and terrifying’ responsibility of high-quality translation -- as he, admittedly, was too “rude and inexperienced in this domain.”

boxes of collected publications held in the University of California, Irvine archives.

Of his most notable works include Writing and Difference, Speech and Phenomena, and Of Grammatology.

The voting difference when Derrida won an honorary degree from Cambridge University in 1992, 336 in favor-204 opposing.

Opponents of the award claimed his writing to be, “denying the distinctions between fact and fiction, observation and imagination, evidence and prejudice."

With over 700 active professional French translators in our system at the time of this article, we would like to open the comments section up for an open discussion relating to French translation, Derrida, and any other ideas from this segment that may have inspired you. What is your experience in translating? Is translating an existential experience for you? If you have ideas, we would love to hear them! Comment below. Stay tuned to find out more about the Famous Translators and Famous Translations.