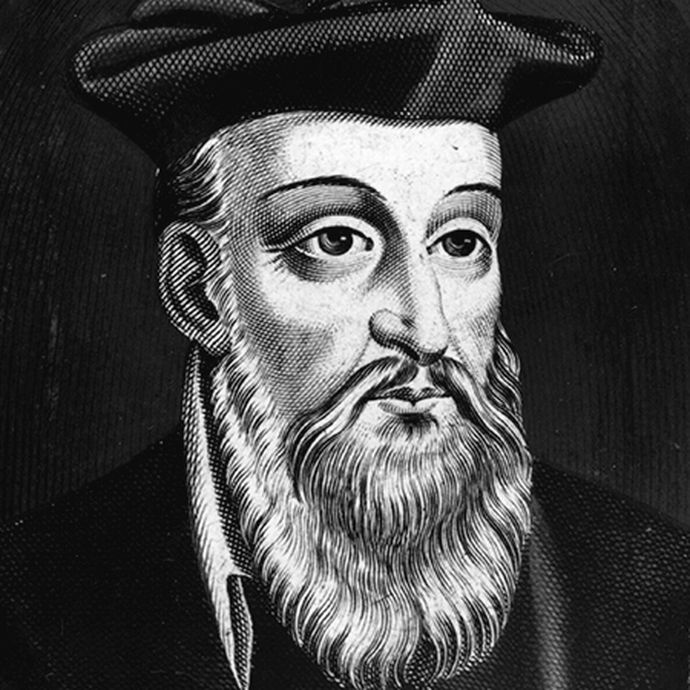 The Mistranslation of the Mystical Nostradamus

“Indeed, the hereditary gift of prophecy will go to the grave with me.”
- Nostradamus

Nostradamus was a widely disputed French physician, astrologer, scholar, sorcerer, and fraud. Growing up wealthy and honored in the French court of Henry II, Nostradamus was said to be in service of queen Catherine de Medici. Best known contemporarily for his book Les Propheties, which supposedly predicts future events, Nostradamus’s credibility has been widely debated for centuries. His book is credited by a large number of supporters and the popular press with having accurately predicted many world events. However, with the many languages his predictions are read in today, what truth is to be taken seriously and what was lost in translation?

There isn’t much to confirm by way of facts with Nostradamus. With all the mistranslation, mysticism and thought-provoking prophecy, the Middle French astrologer seems to be nothing more than a poetic phenomenon who has shocked the world with the ability to predict coincidence. Nostradamus proves to be interesting when considering the importance of high-quality translation

1567    Nostradamus is said to have predicted his own death, in the year 1567. Legend has it that Nostradamus was buried in his grave standing upright. Most extraordinarily, when his body was dug up to be moved during the French Revolution, he is said to have been wearing a medallion engraved with that day’s exact date. There is no historical evidence to support these claims.

4    The number of lines in a quatrain. Les Propheties was written almost entirely using this poetic device, and he used these to write in a kind of code to hide his prophecies from the Church at the time.

64    The age that Mario Reading, a prominent translator of Nostradamus, died on January 29th, 2017. He was a student of medieval French, and has published translations of all the surviving verses of Nostradamus from 1503-66.

942    The number of poetic quatrains collected in Les Propheties. First published in 1555, the book has not been out of print since Nostradamus’s death.

For a merged French and English version of the prophecies of Nostradamus, click here.

For a stark contrast to Nostradamus, read our article on Stephen Hawking, whose predictions are based on scientific observation: "Translating the Universe with Stephen Hawking"