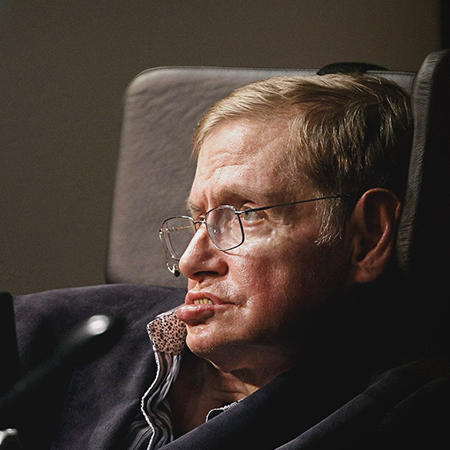 Translating the Universe with Stephen Hawking

"Next time someone complains that you have made a mistake, tell him that may be a good thing. Because without imperfection, neither you nor I would exist." — From “Into the Universe with Stephen Hawking”, 2010

Stephen Hawking is a famous English physicist and celebrity personality. Diagnosed with Amyotrophic Lateral Sclerosis (ALS) at age 22, he has passed away peacefully in his sleep on 14 March 2018. Hawking is most notably famous for his unnerving discoveries about black holes in the 1970s - claiming with supporting evidence that they “could evaporate, even explode, and destroy all information about what had fallen in.” Some argue that his physical complications were somewhat of a tragic blessing, allowing his mind to roam the universe without distraction.

Because his illness is degenerative, he had difficulty using his muscles and therefore rendered, moving, writing, and even speaking next to impossible. He relied on his famous speech software to communicate, and relied on loved ones and colleagues to “write long equations and properly code them into the right math language”.

Those who survive Hawking describe him as having the “dominating presence of a real human being, with an enormous zest for life, great humor, and tremendous determination”.

Stephen Hawking maintained a healthy stubbornness. He insisted on doing everything by himself. This kept his muscles active and his spirit high, arguably allowing him to live as long as he did. He enjoyed his fame, his work, and asking his students to pursue obscure routes to reach pointed conclusions. It isn’t surprising to consider all of us a part of Hawking’s classroom; he provided us principles that cannot be questioned, but if translated correctly from his brain to our hearts provided us with a profound truth that helped us understand our world a bit better. Thank you, Professor. Rest in peace.

To read an interview with Andrew Strominger, a contributor on Hawking’s “Soft Hair on Black Holes” paper, conducted by Seth Fletcher (from Scientific American), click here.